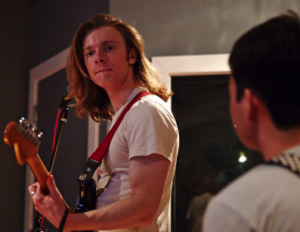 At only 18 years old, actor and musician Finneas O’Connell has already lived out many lifelong dreams.

The Silverlake, Calif.-born teen had the honor of being featured on four episodes of Glee’s final season (he played Alistair), he’s been on Modern Family and in the film Bad Teacher, and his pop-rock music group The Slightlys has won several battle-of-the-bands competitions and performed at the Warped Tour and the Santa Monica Pier Twilight Concert Series. Not too shabby, right? (and side note: If you want to see him live, he and his fellow band mates Darius Dudley II, David Marinelli and Robby Fitzpatrick will be at The Satellite in L.A. on Dec. 3).

To top things off, O’Connell has been in a committed relationship for four years, and admittedly goes to “desperate measures” for his ladylove, who currently lives on the other side of the country.

Thriving at such a young age, it only made sense that skyelyfe chatted with this young man to hear about everything from Glee’s audition and filming process, to growing up as an aspiring actor in L.A., to more or less worshipping Kesha as an artist.

Keep reading to learn more about this hard-working superstar on-the-rise.

skyelyfe: Tell me about your experience filming Glee.

Finneas O’Connell: It was pretty crazy. I’m 18 now, and I was 11 when Glee started. I remember at a pretty young age that Glee was such a huge show. Everyone was either watching Glee or making pop-culture references to it. It was a topical thing … It was great and super fun. It was kind of a crazy time to start. The show was wrapping up, and it was a great thing to be there and witness all of that. I was only on four episodes and it became my whole life for like two-and-a-half months. It’s such an incredibly intense show to be on. You’re doing like three-hour dance rehearsals in the morning, then you show up for a whole day, then you do a recording session at night. There were huge days and the crew was so professional and good at what they do. As a film nerd, any time I wasn’t on camera, I was standing over in video village, just watching the crew do their jobs because they were so good at it. Being on Glee was the biggest thing I’ve ever gotten to do.

FO: I auditioned for Glee for the first time when I was 16. That was in 2013. I put myself on tape and sang a song. A couple months later, I auditioned again at the casting office. That was just a singing audition. I think I sang a Bruno Mars song. And then a month later, I went back and did an on-camera audition. I didn’t get that either, and then a couple months later I went back in for another little part on the show, and that audition was really fun, but I didn’t get that part either. And the fifth time they called me to audition, I kind of wrote it off. I was just sort of like, “Why are they even calling me?” I remember singing like a Green Day song, and because of the nature of that final season, it went very quickly. I think they called me to tell me I’d gotten the part two days after I’d auditioned. And then the next day I had a wardrobe session, and the next day I started filming.

SL: Who did you especially bond with from the cast? 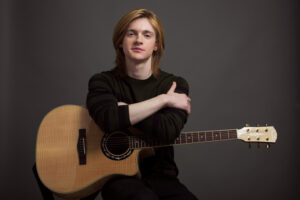 FO: I was coming on kind of as a loner, and so it was really great to have the [sixth season cast], who I think still think felt kind of new, compared to everyone who had been on the show for years. They still felt kind of like the new kids on the block. So they were sort of my gateway into the cast. Everyone on the show was so welcoming, but I think they had the same vibe that I did, and I think that’s really important.

Noah Guthrie is a really incredible songwriter. We talked about music. We talked about our favorite producers and our favorite mixing engineers and our approach to records. That was really cool. And I think Samuel Larsen is so cool. He’s so talented and he’s such a good drummer. I only got to spend like a day-and-a-half with him, but I talked to him the whole time that day and thought he was so cool. I want to play his brother in a film.

SL: You’ve been quoted saying if you could collaborate with anyone, it would be Kesha. Why is that?

FO: I started listening to Kesha when I was 13, and as a songwriter, I’ve always been really interested in people who say stuff that’s never been said before. It’s hard to do that, but whenever anyone manages to say something differently than I’ve ever heard said before, that always makes me super happy. And Kesha can say anything and make it work in a song. I’ve always been sort of interested in female-fronted pop songs. I love Kesha, Lana Del Rey, Katy Perry. That’s kind of been my M.O. since I was little. I’ve always loved Aly and AJ. Kesha’s super melodic, and her hooks are [amazing]. I love her aesthetic and her glitter-pop. I think it’s so cool.

The song “Past Lives” is all Kesha. No one co-wrote that song with her. It was just her writing, and I think that’s probably my favorite Kesha song ever. I think it’s just a cool song. I haven’t met her, but I’ve met a bunch of people who have met her, and they all confirm the stories that she’s just as interesting and eccentric and fun and nice as she is in interviews, so I hope one day I get to meet her. 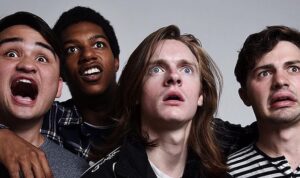 SL: Tell me about The Slightlys’ new music

FO: We went into the studio in April to record a couple of songs. We made four songs, and they’re all kind of about a relationship set in the city of Los Angeles, and being a young adult and trying to figure out who you are as a person and who other people are. It’s a lot of self-discovery. The song we just put out, “Desperate Measures,” kind of [explores] that feeling where you fall in love with someone and it’s not a super healthy feeling because you’re kind of insane for someone. When you’re in love with someone, what could be better than spending time waiting in line and getting yelled at, at the DMV with them? You want to spend time with that person. It’s about flying across the country to visit that person.

SL: Are you in a relationship?

FO: Yeah, I’m dating a girl who goes to school in New York City, and we’ve been going out for almost four years now.

SL: So, is this song inspired by her?

FO: Oh, totally. Yeah. I remember our drummer calling me one time and he was watching his girlfriend walk down a parade this one time. And he was like, “I understand what ‘Desperate Measures’ is about!” It’s self-examination and being aware that what you’re doing is maybe ridiculous and maybe not the most practical use of time, but it’s all you really want to be doing. You wouldn’t want to be at home doing something else.

SL: Tell me a little about how your experience has been growing up in L.A.

FO: Growing up in L.A. is an interesting phenomenon. I don’t think a lot of people that end up here started here, and I think vice versa. I think a lot of people who start here travel across the country. Growing up in L.A. was helpful in a lot of ways because as an actor, especially, a lot of what being an actor is, is driving to the Westside and trying to find parking for 15 minutes, and going in and waiting for 45 minutes to do a two-page audition, and then coming out with a parking ticket, and then you sit in traffic for an hour to get home. That’s not what the billboards say acting is going to be. I don’t think that’s your idea of, “Oh yeah, I want to be an actor. I want to do that.” And rightfully so. It’s pretty boring.

My parents were both actors, and because I grew up in L.A., when I was little, I’d just go to auditions with my parents. It always seemed like fun to me. I was sort of a dummy about it. I thought even the crappy parts of being an actor seemed like fun. Growing up in L.A., I was always like, “Mom, I want to be an actor,” and she was like, “Do you really want to be an actor?” Being an actor doesn’t mean getting to be on Glee. Being an actor means working really hard and going to hundreds of auditions and not booking anything. Maybe if you’re lucky, you’ll get on four episodes of Glee. I’m super lucky and so grateful.

There’s a lot of opportunity to feel really lonely in L.A. because it’s a car-based city. A lot of the time, I’m just driving around kind of isolated. But it’s also a very communal city in a lot of ways. I’ve been a vegan for a few years, and wow, you can get some really good food out here. There’s a vegan donut place near me [near Eagle Rock] called Donut Friend and there are so many live music venues. As a music nerd, there’s nothing better than being able to go see any band you’ve ever heard of.

Check out “Desperate Measures” below!:

Skyelyfe was created by veteran entertainment journalist Dahvi Shira in Sept. 2014. The site captures the love for her favorite people, places and things in the City of Angels—while incorporating the name skye, which represents dreams with no limits. END_OF_DOCUMENT_TOKEN_TO_BE_REPLACED