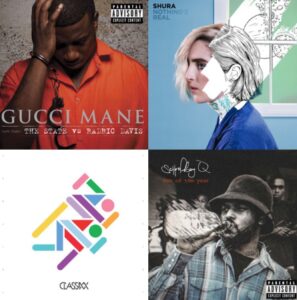 Road trips are great and all, but when it comes to Coachella, we really have the mindset of just get me there already, right?

But unfortunately, it doesn’t quite work that way, and sometimes we are stuck cruisin’ for hours to get to the coveted Coachella Valley desert area.

That said, what gets us more amped for the festival than a little taste of what’s to come over the next few days? Well, clearly not traffic! Forget about your traveling woes and scroll to the bottom of the post for a playlist of the 48 artists skyelyfe encourages you to see. IMHO, if you miss Gucci Mane, Shura, Classixx or ScHoolboy Q, why did you even bother showing up?!

But regardless of who you watch, if you’re feeling reminiscent about last year’s festival, listen to my must-see playlist from Coachella 2016. And above all else, safe travels! With that in mind, here’s a playlist of my favorites of the Grammy nominees this year.  If you’ve read my previous posts, you obviously know how obsessed I am with X by Chris Brown, so it’s no shock that I am very excited about his nominations (best r&b performance, best r&b song, best urban contemporary album). How X wasn’t nominated for best album is beyond me, but I am happy with Beck‘s nomination in that category for Morning Phase. He is consistently golden.

I am also pleased with most of the dance/electronic nominations. Nabuma Rubberband is regularly on repeat, but then again, I’ve never complained about anything done by Little Dragon. Right up there with LD for best dance/electronic album is Royksopp and Robyn with Do It Again.

And I am beyond thrilled about Schoolboy Q‘s nominations. His sound is so ridiculously on point. I am shocked that he hasn’t really blown up yet. He reminds me of the good, real rap from back in the day. I do wish “Man of the Year” had been nominated, though.

Lecrae – best rap performance (“All I Need Is You”)

Skyelyfe was created by veteran entertainment journalist Dahvi Shira in Sept. 2014. The site captures the love for her favorite people, places and things in the City of Angels—while incorporating the name skye, which represents dreams with no limits. END_OF_DOCUMENT_TOKEN_TO_BE_REPLACED